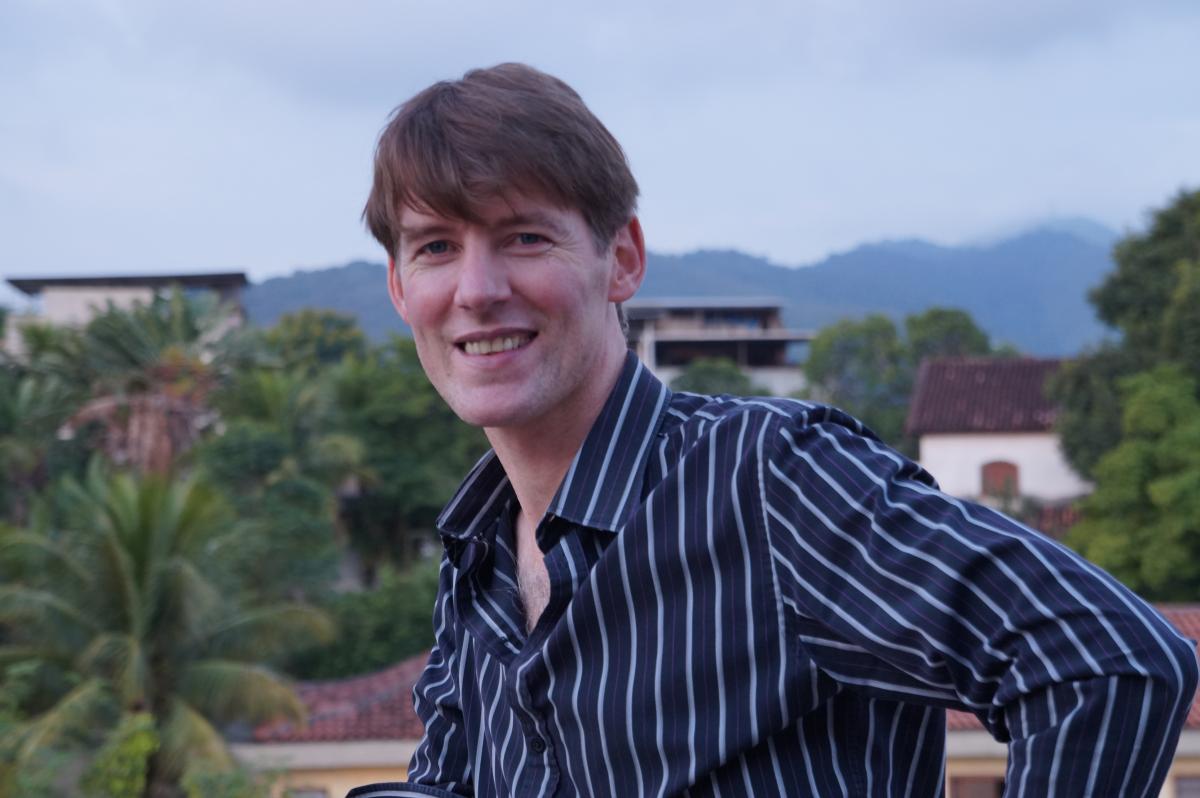 Initially trained as a musician, Greg Vanders started dancing at 18 years old, inspired by Musical Comedy films. He trained as a classical dancer and was quickly accepted by MUDRA, Béjart’s school. After having danced and sung in various musical comedies at “Flanders Ballet”, “R.T.B.F.’, “Ghent Opera”, “Antwerp Opera”, at the “Theatre in the Park”, etc., he decided to specialise in Tap Dance. He perfected his technique in Paris, with Victor Cuno (himself taught by Henry LeTang), a teacher with an international reputation.

Greg Vanders’ dream was to create his own Tap Dance and Musical Comedy Company. In 1987 he created the association: 1.2.3. J’ai vu! which produced two shows that were subsidised by the “French Community of Belgium”: “Papi-Papillon” (a show for children)- “Rêves à Rythmes” (a contemporary Tap Dance Show).

He then fitted out a rehearsal studio for his company from where, since 1989, he has been developing Fred Academy, a school for Tap at all levels.

Greg Vanders continued his training in New York where he studied in workshops each summer with renowned Tap teachers and dancers such as Barbara Duffy, Savion Glover, Black and Lisa Hopkins, not forgetting Chuck Green, Brenda Bufalino, Sarah Petronio and Sam Weber.

In 1995, with his new company: The Brussels Tap Dance Company he took first prize – category groups, at the International Tap Meeting at Bourg-la-Reine (Paris) with his astonishing show marrying Taps and Chairs to the repetitive music of John Adams.

Tap Dance remains, however, the main discipline taught at Fred Academy. Several times a year the school organises International Workshops for all Tappers whether foreigners or Belgians. Among the teachers that Fred Academy has had the pleasure of welcoming, we find the Swiss, Victor Cuno, the Americans Lane Alexander, Chuck Green, Steven Harper, Max Pollack and Sam Weber, the French Leela Petronia, Fabien Ruiz and Marion Sandner, as well as the American ladies, Lisa Hopkins, Brenda Bufalino, Sarah Petronio and Heather Cornell.

Recognised as "the Belgian Specialist" of Tap, Greg Vanders has also worked in the Flemish part of the country:

- In 1997 and 1998 he was the Tap teacher at the “Brussels Royal Conservatory”, which is the Brussels Erasmus High School department for Music students; in 2003 he taught Tap Dance in the biggest dance school in Antwerp: “Dansstudio Arabesque”.

- In 2007 he was invited to perform as a soloist by “LA GIOIA Inter-voices” choral society, to interpret “Sacred Concert”, a mass written by Duke Ellington. This concert was conducted by Ludwig Van Gijsegem and was performed in many churches in Belgium (Ename, Zele, Brussels, etc.)

- In 2007 he also performed the contemporary work for piano and tap by L. Sumera “Pardon, Fryderyk!” in Studio 1 at Flagey, accompanied by the pianist Yu-Feng Chang.

- For the 2009 2010 season, he took part in the tour by the new concept “Radio Modern” as instructor and soloist, accompanied by different Big Bands, in Brussels, Ghent, Louvain and Antwerp.

Greg Vanders collaborated in the production of the latest film by Alain Berliner: “J’aurais voulu être un danseur” – “I would like to have been a dancer” (released in 2005) in which he dubbed the sounds of Vincent Elbaz and Jean-Pierre Cassel’s taps, in studio. At this moment, he is on the poster of the Belgian film “Les Barons” by Nabil Ben Yadir (filmed in 2008 and released in 2009).

In February 2009, Greg Vanders created a grand Tap and Jazz Show: “TAP TONIGHT 2009” at the Vaudeville Theatre, Brussels with the special participation of Sarah Petronio with whom he danced a duo in five performances of “sold out”.

Fred Academy is increasingly being asked to act as artistic agent for the creation of numerous events and animations. In September 2009, they were contacted by Brussels Town to create a show with 20 dancers in the Grand Place, Brussels, to accompany Belgian singers during the Festival of the Belgian French Community. This show was broadcast live by the Belgian television company, RTBF.

Over the years, Greg Vanders has become the benchmark for Tap in Europe. He is the Belgian representative for the I.T.A. (International Tap Association) and has also been one of the judges for the international competition “La Coupe de Paris”, “The Paris Cup”, since 2004. Having already been invited as a Tap Teacher to Paris (November 2007) and to Poland (Gdansk in December 2009), he is one of just a few Europeans to have taken part in the prestigious Tap Festival TAP CITY of New York; as a guest teacher offering a master class and also as a soloist in the closing show on 10th July 2010 on Broadway !

Since 2011, students of the Fred Academy have been regularly invited to perform on one of the main stages of the "Brussels Jazz Marathon" in a lively, public outdoor show.

From June to December 2013, Greg Vanders participated with his partner Sharon Miles and dancers of his company in four TV shows of "Belgium's Got Talent" on both the French (RTL-TVI) and Dutch (VTM) channels.

In September 2013, Greg Vanders was invited to participate as a jury member in the Swiss Tap Championships in Lausanne.

In December 2013, Greg Vanders was invited to perform as a soloist for a series of concerts devoted to GERSHWIN in collaboration with classical pianist Waldo Geuns and jazz pianist Arne Van Coillie.

In May 2014, Greg Vanders was invited to Brazil to act as jury president in an inter-school competition organized by Paloma Collaço in RIO DE JANEIRO.

May 30, 2015, Greg was invited by Arpad Pirovits to perform as a soloist at the Budapest Tap Festival: Orszagos Sztepptanc Fesztivál (BudaStep).

ANY SUBJECT, ANY LEVEL, ANYTIME !

Every week something new to learn or improve